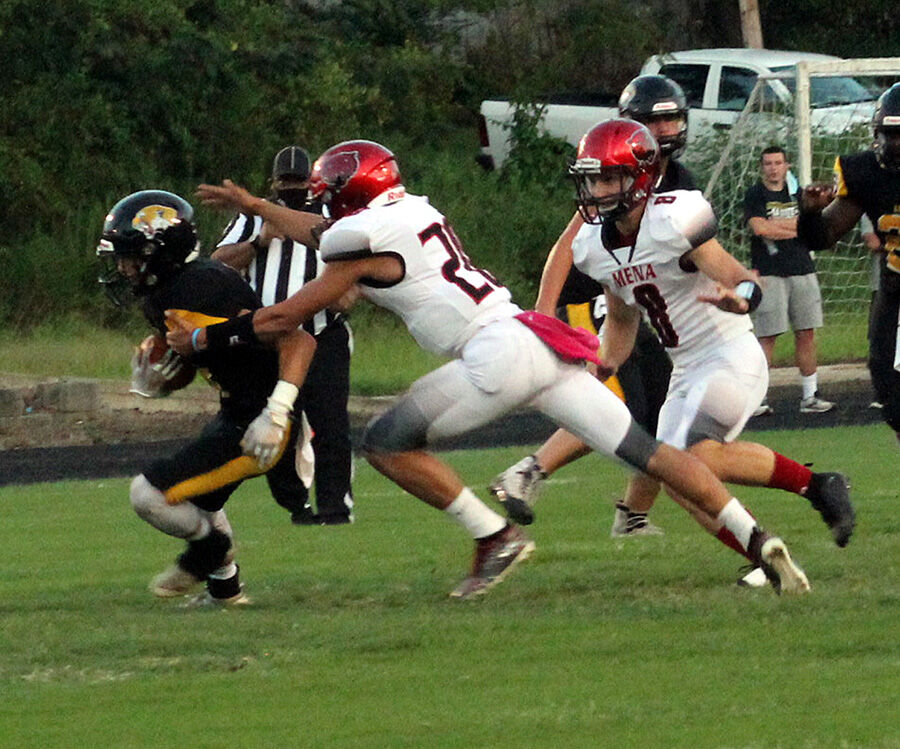 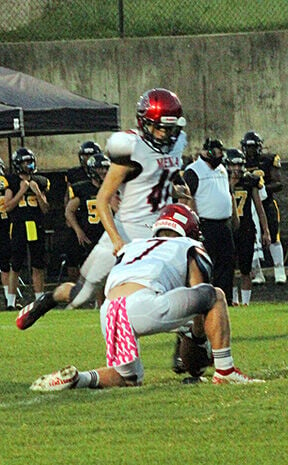 Football season began on a hot and muggy night at De Queen. With the atmosphere saturated with humidity from the remnants of Hurricane Laura, the heat index level was near triple digits at kickoff and dropped little during the game. Fans would have been gasping for breath even without the required masks.

On the field Mena extended its streak against De Queen. The senior laden Bearcats dropped the Leopards 39-0.

A three and out possession followed De Queen's receiving the opening kickoff. After the punt

Mena's first possession began at its 35.

The Bearcats ran 11 plays, four of them off side penalties against De Queen. The drive ended with Jake Wiles scoring from the DHS two with 6:39 in the first quarter.

Jorge Vega returned the ensuing kickoff from the Leopard two to the 45. Before he had crossed the 15, a flag had already been thrown up field. A holding infraction moved the ball back to the De Queen 25. A first down fumble was recovered by Mena at the Leopard 16.

Max Montgomery threw to Gaven Hooper for six. Wiles ran for eight. On first and goal from the two, Cauy House went over left guard to score. Hernandez kicked the extra point to make it 13-0 with 5:08 left in the first.

A 28 yard kickoff return by Tye Lindsey gave De Queen the ball at the 36, but again the Leopards could not move. After the punt the Bearcats had a first down at their 48. Another offside penalty cost De Queen five. On first and five Montgomery connected with Hooper deep for a 47 yard TD. The PAT gave Mena a 20-0 lead with 3:03 still left in the opening quarter.

All the points came before halftime. In the first minute of the second quarter Mason Brotherton pulled in a 30 yard touchdown pass to make it 26-0.

Hooper caught a short pass and ran the ball in for a 32 yard score with 7:42 before the half.

With 2:12 on the clock Wiles scored again, this time on a one yard plunge. The extra point put the visitors up 39-0.

Reserves came into the game after halftime. With the clock running throughout, the third quarter was consumed by a Mena drive that got inside the De Queen 20 before a sack by Brandon Perez put the Bearcats in a fourth and 24. De Queen took over after an incompletion.

The Bearcats crossed the 50 once in the fourth before a holding penalty killed the drive.

Hooper had three receptions for 93 yards and two TD’s. Brotherton had two catches for 33 yards and one touchdown.

Sam Efird, Connor Efird and Caleb Peters each made five tackles for Mena.