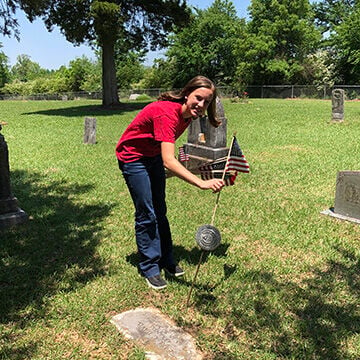 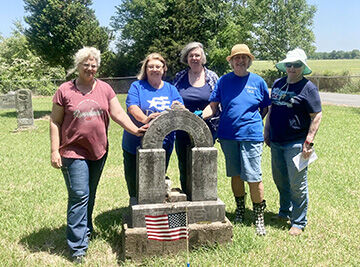 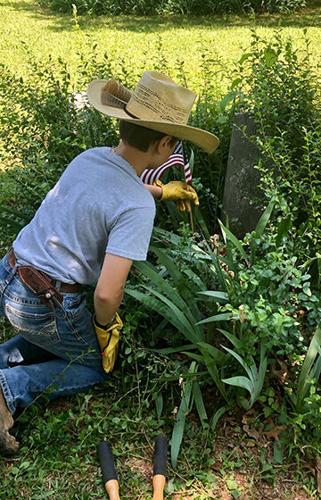 The chapter was excited to locate old records that led to the discovery of veteran number “44”. An old publication, “Memories of Old Dallas” by Bonsell and Petrasek shed light on Sergeant Richard “Uncle Dick” Henry Davis of the 4th Arkansas Infantry, Confederate States of America. According to Fold 3 records, Davis was mustered into the War Between the States in August 1861. He was wounded in the arm while in battle at Murfreesboro, TN, also known as the Battle of Stones River. Richard Davis was extremely fortunate. The battle at Stones River claimed 23,000 casualties, and it was the second bloodiest battle fought west of the Appalachians during the Civil War. Five years after the Civil War, the 1870 U.S. Census reveals Davis is married with two small children and living on a farm in the Old Dallas community near where the airport is located. The Civil War made a huge impact on this rural Arkansas man. The article by Bonsell and Petrasek stated, “as a relic of his service in the Confederate Army, Uncle Dick always carried his buggy whip in rifle position.”

DAR members, HODARS (husbands of Daughters of the American Revolution) and members’ grandchildren all worked side by side to make sure every known veteran in the Old Dallas Cemetery was honored.

Daughters of the American Revolution is a nonprofit, nonpolitical volunteer women’s service organization dedicated to preserving American history, promoting patriotism, and securing America’s future through better education. Any woman, regardless of race, religion, or ethnic background, who can prove their lineal decent from patriots of the American Revolution is eligible to join. For more information, contact Registrar Carolyn Hanna at carolynhanna220@gmail.com